Closing out the year

So, 2012 comes to an end.  It’s early evening on December 31st, and I’m still deciding what to do with the rest of the evening.  It was a lovely day here.  This time of year that simply means no rain, but it wasn’t half bad overall.  A little cloudy/foggy, but some clear sky too.  Chilly but not freezing.  I spent the afternoon raking more leaves.  Hopefully I’ll be done with this task by spring.  The dogs were out running around, with Farley feeling especially frisky and back to running the fence line after big trucks and bicyclists.  He was diagnosed with interstitial

Farley at the vet’s; he was a little worried, so climbed up into the other chair next to mine.

pneumonia earlier this month, and after a course of antibiotics he’s almost a new dog.  I knew something was wrong, just not what, and still have no idea how he contracted pneumonia.  He wasn’t his happy self, becoming old-man-slow and somewhat listless, and it’s so good to see him back to normal, obsessing about the ball/his toys and insisting I throw it for him.  I was chalking some of his behavior to his age (not sure, but he’s probably at least 8 years old now) and some of it to Daisy’s constant Thing with him – not quite bullying, but definitely some jealousy and vying for the Number 1 spot in my heart, but thankfully trusted my gut and got him into the vet again (was there last month with the same, vague “not himself” complaint).  He still has to deal with Daisy, but doesn’t seem depressed any more and mostly ignores her.  I love her to bits, but he’s my guy and she, being a good bitch, is at work to change that.  She and Pal both ran their butts off today, and immediately fell asleep on the sofa when we came in just before dark.  Peachy saw an opportunity and is now quiet and happy. 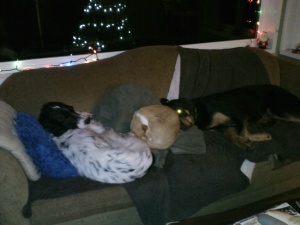 Pal, Peach, and Daisy all snuggled up – love these guys.

The sheep were out today, as were the chickens.  I always let them out on these nicer days, and even on not-so-nice days – if I’m home everybody gets out.  The sheep love it.  They’re in their pen for the winter, and while there’s plenty of room for all of them, it’s still great for them to get out and stretch their legs.  The Shetlands leap into the air pronging, with a sideways kick and frolic, with the lambs (now eight months old) looking like tiny, wooly broncos as they dash around; the fat old BWMs just prong (bounce on all four hooves at once) a bit, too old and/or fat to show quite the same exuberance as the Shetlands, but just as happy to be out.  The chickens all head over to the larger cedar trees, where the dirt is still dry enough to have a bit of a dust bath, or else under the porch for the same.

I harvested the last of my carrots today, as I could see the voles/mice were dining steadily on what was out there.  Another four or five pounds, though the biggest were all damaged, some beyond salvage.  I have found that these critters are precise in targeting the largest specimens, whether it’s my beets, potatoes, carrots, or chard.  Rarely are the smaller roots bothered at all, but the biggest ones are nearly always damaged.  One of my goals for 2013 is to get this issue under control.  I’m pretty sure it’s meadow voles, and have seen a little guy running from one hole to another in the beet patch, but I have no idea how to combat them.

It was a nice way to wind up the year, with some satisfying work cleaning up the leaves, harvesting, and enjoying my critters enjoying life.  I’m looking forward to 2013, and if half of my goals are accomplished it will be another fabulous year.  Cheers!

Posted in Dogs and other critters

7 thoughts on “Closing out the year”