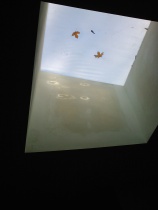 Skylight art. This is not one of the ones that’s leaking, thankfully! (Because this one is right over my bed!)

It’s February already, and we’re into the New Year well and good.  I’m mostly remembering to write 2013 now, not 2012.  The weather is back to normal: rain, rain, and more rain.  In fact, so much rain that I’ve sprung a leak, and found the skylight in my loft dripping again this past week.  Last year when it leaked it was blamed on the snow pack build up and melt (it’s on an area of a very steep roof pitch).  The guys came out to patch it up (more caulking around the flashing) and I thought that was that.  But, alas, no snow this time, and it’s leaking again. Unfortunately another skylight is also leaking.  I checked to see if there was some sort of debris build up – a pile of wet leaves on the uphill side could potentially cause some back up saturation, but nothing.  It’s a bummer, since the roof and skylights are still pretty new (June 2010 complete reroof/installation), but hopefully the damage to the ceiling isn’t too bad.  It seems to be a very slow leak; when I discovered it there were just drips on the floor, with mild damage/swelling to the wood floor (I’m keeping a bucket there now, until I can get someone out to fix this once and for all).  Thankfully the other three skylights seem fine – I have five total – though there is some suspicious mold spotting in a third…hmm.

It’s class season again, with nearly every weekend filled with interesting things to learn.  I’m not signing up for many this year, though, and the one I did sign up for conflicts with another I reeeeally want to take, but c’est la vie and I’ll have to wait for next year’s version.  I did go to Country Living Expo & Cattleman’s Winterschool again this year (and it caused a conflict with my other class, so missed one of those), but I think it will be the last year I do Winterschool for a while, unless something I absolutely can’t resist comes up next year.  I had a class at last year’s Winterschool that was a major disappointment, and this year there were two that were total wastes, two disappointing “meh” and two that were okay and worth going to.  Unfortunately the two okay classes were the first and last of the six sessions, with a lot of frustration in between (sheep shearing class without a sheep!, and the instructor didn’t even turn the shearers on!).  The two “waste of time” classes were primarily due to instructor substitutes at the last minute, and while I understand things happen, I would rather have sat in on another class session than wasted a whole hour getting frustrated.  It seems there should be some contingency for that, to allow people to choose something different instead.  Oh well.

The class that I missed that day for the Winterschool classes was my second Nose Work class with Daisy.  This weekend was our third class session 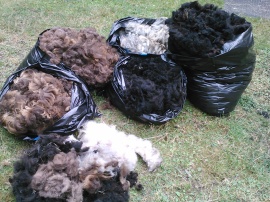 and I’m not missing any more!  Even though there’s a class with the Snohomish WSU Extension that looks great but would cause me to miss two more of Daisy’s classes, plus another class/day long seminar that coincides with both.  The one, Women In Agriculture, is one I attended last year.  It was a great day, but not really a fit for me, since I’m not growing anything commercially (yet!).    The Growing Groceries class is on four Saturdays – normally perfect for me, but conflict with two more NoseWork classes.  It’s so frustrating, because the WSU classes normally tend to be on weeknights, at 6:30 p.m., in a city 25 miles north of here (meaning: impossible for me to do, with my work and home schedules).  Dang, because Growing Groceries (learning how and sharing that knowledge via community service) is exactly what I want to be doing – encouraging people to grow their own food – but again, it will have to wait until next year.  And I tell myself it might not be “all that” anyway (witness my excitement for Winterschool this year, which turned out to be frustrating disappointment).  One of the disclaimers you have to sign for GG says something about towing the line and not espousing personal beliefs when it comes to pesticide control, etc.  I guess they may use non-organic practices when needed, and you have to be good with that, and not disagree.  All in all, though, the WSU Extension (and especially the Snohomish County chapter) absolutely rocks!

But back to K9 Nose Work.  I went to the first class on the 19th, not knowing quite what to expect.  I’d had more than one person recommend it to me, including a friend with a reactive Scottish Terrier, who knows the struggles I’ve had with my outta-control-in-public wild thing, Daisy.  Within minutes of being at the class, I knew we were in the right place.  As soon as the in structor, Marilyn, said “no obedience allowed!” in Nosework training, I relaxed a bit.  Daisy is easily overstimulated, and a trip out in public means we spend a lot of time pulling on each other.  She’s wildly enthusiastic and gets positively hyper when she sees another person or dog.  I blame myself, but know she’s not a mean dog, and just wants to meet people, sure she’s meeting her new best friend each time.  No obedience in class meant we wouldn’t be spending the whole hour trying to get her contained, and feeling embarrassed, exasperated and discouraged in the end anyway.

It’s fun to see her work with her nose, even through her ADD overstimulation, and trying to get 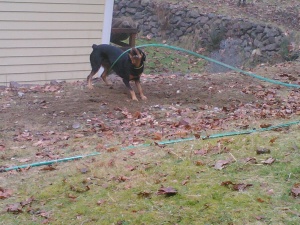 A more typical pastime – playing with the garden hose and having tons of fun!

her back on track can be a challenge sometimes.  She’s happy and excited, and really likes the many treats she gets.  We practice out in the garage on weeknights, and the 10 minutes we spend is just enough.  I don’t seem to have an attention span much longer than hers, and I can see her falling off right at about 10 minutes.  I have another friend who’s been doing it for a little while with her Rottweiler and really likes it too (though she’s a three hour drive north, so we don’t get to practice together).  I’m looking forward to seeing where this leads us.

Today was a quiet day.  I overindulged a bit on Friday night, out with some gal pals for our modern day salon – meeting once a month to chat, meditate, and set intentions.  We didn’t eat dinner until nearly midnight, noshing on veggies and dip all evening, but the wine was flowing freely all night.  I never felt tipsy, and didn’t have a hangover on Saturday, but my body was definitely processing all weekend, and I never had the vim and vigor I needed to do my outside chores (beyond the absolute minimum).  Of course the weather probably had something to do with that.  It was supposed to be nicer than it was, according to the weather reports, with predictions of 50 degrees and sunshine.  It wasn’t 50 degrees, and there was zero sun.  And the cloudy chill just didn’t inspire me much.