It’s a jungle out there

And it’s a recurring theme for me, the shock and awe I have for this riot of growth. I know it isn’t unique—anywhere that experiences four distinct seasons, and especially long winters, is just as resurrected each spring.  Our daylight hours are running close to peak right now, with the sun rising at 5:11 a.m. and setting at 9:08 for nearly 16 hours of daylight, so it’s no wonder the plants are going wild.  We’re closing in on solstice, so gaining less than a minute more each day until the 21st, when it will begin going in the wrong direction again (shorter days). [I started this draft two weeks ago.] And the riotous growth will begin to taper so maybe I can get ahead of it some. Ha!

These long, long days are wonderful…and wreak havoc on my schedule.  I find it hard to come inside much before 10 p.m. The house is a mess, the garden is half planted (the other half is covered-carpeted really-with volunteers (a.k.a. weeds)), and the green keeps getting greener.  The driveway needs bushwhacking from the road to the gate (it looks like an abandoned property).

The sheep are doing a decent job of keeping the grass around the house from growing a foot high, and are also sampling some landscape plantings along the way.  They’ve decimated the comfrey and the valerian, and the wisteria (that

last is just fine – the vine is in a poor location and I hacked it back to a stump earlier this year), and have so far left the garden alone, though I saw Minnie nosing the fence the other day (it’s a light netting that can be easily pushed down).  They were nibbling on the hops vine earlier in the year, but now that there’s so much else to eat, they seem to be less interested.  Even so, I have to get the weed whacker out to take down the grass seed heads and the Canada thistle patch – no matter how much I kill off every year it comes back stronger every year.  The bull thistle is nearly as bad, but doesn’t seem to have the same traveling root system (not a typical rhizome, but not just a taproot either), so a well-placed shovel or hoe action a few times a year seems to keep it minimized around the property.

Another recurring theme for me is this constant feeling of not having enough time to do everything, even with these deliciously long days (sleep being one of many things that’s compromised because of it).  I have so much I want to do, so many interests, and so many of things I am already doing.  Just keeping up with the full time job would be plenty, and then I add the second job of maintaining (or trying to) a small farm with livestock, pets, garden (growing my own food) and general upkeep on acreage. Add in an obsession like Nosework, or carting, or the desire to work with Daisy in herding. Her instincts are fabulous and she is SO good, and can be really helpful at times, but when she doesn’t know exactly what I want, and when I’m not sure how to tell her what I want/how to work with her, it can

A recent cart trip to a local park. On the Snoqualmie River.

become chaotic quickly.  I still want to do Nosework with Farley, since he has such an affinity for it, but have taken a break for a few months (file it under the “something’s gotta give” heading).  Daisy’s work with the sheep is ongoing by necessity and her keen interest. I also get her out with her cart as time allows. Pal seems to be missing from the equation – he’s not bad at Nosework, but his forte is hunting for real.  He never stops hunting, and the only time he stops when he’s outside is when he’s on point (usually a songbird in a tree) or stalking varmints.  I watched him in the pasture the other day, holding a 3-legged point on something in the grass, slowly, slowly, putting the fourth paw down as he crept forward in ultra slow motion stalk. He’s really amazing to watch, though it’s like living with a 47 pound cat at times.  I know he gets shrews nearly as regularly as the cats, and just tonight I found a dead mole in the sheep pen.  I have no idea when he got in there to get that.  Last night when I was wrapping up for the night, filling the hay nets before it got full dark, and Farley and Daisy were still busy with their outside tasks (Farley waiting for me to throw the ball again, Daisy rounding up the chickens), I noticed Pal on the porch, lying on the doormat.  I smiled, thinking he was finally growing up and slowing down a bit (he’ll be 5 years old in October).  By the time I got done with the tasks it was pretty dark, and as I walked up to the porch he got up, happy to see the three of us coming to go inside.  I noticed a rather large object in his mouth.  He’s not much into toys, so I knew it wasn’t one of Farley’s many stuffies scattered around the yard.  A bone dug up?  Or a…rat?  (large rat!) 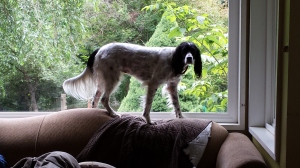 Was it a squirrel?  No tail.  What the…?  I was amazed and dismayed to find it was a small (half grown) rabbit.  Quite dead of course, and he was all happy, ready to go inside with his prize.  No. Way.  I was amazed partly because in 4.5 years here I’ve seen a rabbit only once on this property.  I have no idea where he got it (what part of the property).  It was of course adorable, as a juvenile, though I didn’t turn the porch light on to get a good look.  I tossed it into the grass and he jumped down the steps to get it – I heard a bony crunch as he grabbed it and I thought he was going to eat it (a good thing!) but he left it and came inside. Sigh. It was gone this morning, which means that most likely Farley took it off to bury it on one of their late night potty trips.  Farley’s my buryer, in an arcane save-it-for-later mentality.  Fortunately none of the bodies he’s buried have been dug up for later dining (to my knowledge), but there have been plenty of bones (I generally confine him to the house when I feed them raw bones, as he will take every one I give him and bury it, if given the opportunity.  And usually moving it several times before he’s finally satisfied it’s safe from marauders (his housemates).  An hour, a day, or a month later, one of them will bring a blackened gross thing up to the house and it takes me a moment to figure out what it is.

This evening the one of the hens grabbed an odd looking object from the front lawn (lawn being optional, since Daisy has made a large ugly scrape of dirt in front). The chickens regularly glean the mice and shrew leavings from the cats (and the common ancestry of birds and reptiles becomes acutely apparent at these times, as the hen generally chokes down the whole thing, like a snake), but this looked different.  I’d noticed Daisy sniffing something this morning, but when I toed it, I thought it was a clump of manure.  I chased after the hen, realizing from the angles sticking out of her mouth, that what she had looked like a…gulp, bat.  By the time I got to her she had the thing half swallowed, but I grabbed it by the—yup, it was a bat – wing and pulled it out.  Ugh!  I love bats, and was truly bummed that one was killed.  It was tiny—like a small shrew with wings—and had obviously been dead for a couple of days.  Of course I get all heebie jeebie about rabies but when I thought about it, and remembered having observed not only super low flying by bats (only a few feet off the ground at times) and also wild leaps up by the cats to get them, I can only assume it was bad luck for the bat.  I’ve seen them do the same thing with dragonflies – another critter I love and have rescued dragonflies from the cats (and not gotten there in time for others).  Life with carnivores can be hard to take sometimes. 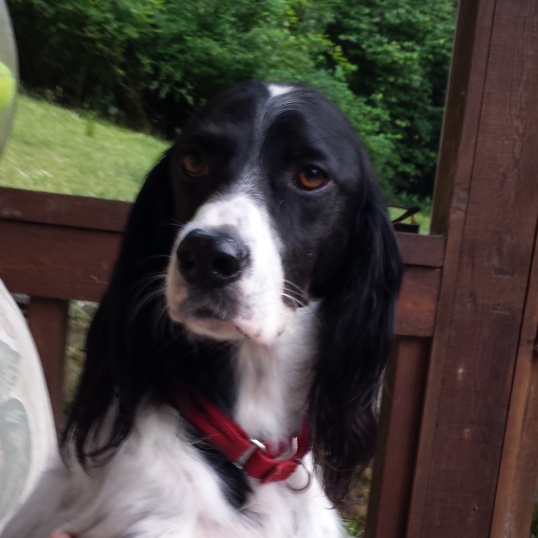 One thought on “It’s a jungle out there”