Farmer’s Lung and the power of good health {part 2}

Let me just start off by saying I am so sick of being sick. It’s miserable, and as debilitating emotionally as it is physically. 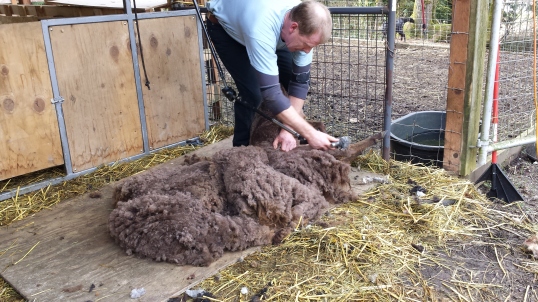 In one of the many instances of “the show must go on” category on the farm, today was shearing day, with Eifion Morgan, the man with the iron back, who comes all the way from Wales every year for shearing season.

And with that, I guess it’s obvious I’m not getting better.  I’ve had good days here and there—even two in a row last week (and the hope glows white hot at those times), but overall, I’d say I’m the same, maybe even a bit worse. And not sure what to do next.

Because here’s what I’ve found: The medical system just wants to swallow you whole and poop you out as a dried, dead turd. The machine of organized medicine, and all its players, seems to have no interest in you as a human being and is far too eager to push you into the “invalid” category.  And all that power you don’t even know that you hold when you’re healthy and well…poof! You are now just a patient (a word I’m not finding fits very well in either of its two meanings).  I’m sure my pulmonologist is brilliant and accomplished, but all I am to her and her staff is a pair of lungs, I think. There seems to be no sense of urgency and, with no pat answers (sorry!), no interest in really looking into anything beyond recommending more tests. While I realize the tests (all invasive at this point) do help to rule things out, I also think that to a large degree we’re chasing snipes. And I also realize that she, and all doctors, are busy and have an incredibly demanding job, with everyone they see being another needy patient. While I’m looking for a medical partner to finding my way back to full health, I find I’m running into the shock-to-my-sensibilities of just being the next invalid they’re seeing.  Invalid has two meanings: “sickly”and “not valid.” It’s kind of scary how quickly you’re moved into the second meaning when they really want to send you home with a pill and call it good.

Nutmeg and her sister after their first shearing. The lambs (almost yearlings now) were all bleating for an hour or more afterwards, not recognizing their mamas or each other after shearing.

And here’s a bit of brilliance from my champion bestie, Laurie (the woman is a rock star, in too many ways to count):

“The problem is that one really needs to be one’s own advocate with medical professionals, and that’s hard to do when you’re not feeling well, and feeling on and off discouraged/depressed. Sometimes, in my jaded opinion, they count on that. I saw on PBS the other night a Frontline by the guy who wrote On Mortality [Atul Gawande – I’ve read and thoroughly enjoyed several of his books], and he talked about the fact that doctors have a hard time dealing with people they can’t help. Someone who doesn’t fit into the pigeonholes they have in their brains is just a pain in the ass, because they get all their self-identification and professional satisfaction from those they can help. Understandable, but something that makes being one of those they’re not able to diagnose and “fix” pretty damned hard.”

The CT scan showed a number of things; the “ground glass” visual being the most marked for this non-medical professional.  The radiologist’s report went over all the things seen, and what they could be an indication of – many $40 words there.  It was obvious that this person had none of my history (symptoms) so s/he ran down the road with all the scary ones.  Well, they’re all scary, honestly, but the one that fits best, physical symptom-wise, is the hypersensitivity pneumonitis (aka Farmer’s Lung), of which nothing more was said beyond the single mention here.

“Diffuse interstitial ground-glass disease pattern throughout both lungs, from apex to base, with patchy geographic areas of sparing and scattered bleb (cyst)-like lesions.

Lymphangiomyomatosis is less likely, since instead of multiple small cystic lesions, there are areas of less extensively involved ground-glass interstitial disease.

It’s good to know that the heart looks normal, because these days, she’s the only muscle getting a workout.  With the slightest exertion I’m gasping for breath, my heart pounding like I’ve run a marathon.  The rest of my muscles remain starved for oxygen, so I have to stop frequently to give everything a chance to catch up.  And that’s on a good day when I feel okay.

Now my work begins: 14 beautiful fleeces to skirt and ready for selling and/or processing.

From here, as mentioned in my previous post, the doctor wanted to do a bronchoscopy with a lavage to collect cells, and some snipping at the lung tissue and lymph nodes for biopsy.  I’m not keen on that snipping stuff, though it may come to it yet.  I suggested a conservative approach and we did allergy testing.  And I’m not allergic to anything but bentgrass (what is that?), and that only mildly, and even more mildly, cottonwood (never had any problems with cottonwood).  All the heavy hitters – molds, bird proteins, cat and dog dander, pollens – nuthin’  That’s good, of course (and no surprise to me), but no answer for this Farmer’s lung I’ve diagnosed (hypersensitivity pneumonitis).

I have a follow up appointment next week, where the staff will again tell me to use the Flonase (prescribed by my GP, way back in December – looking for one of those pat answers) that doesn’t work, and to avoid cottonwoods (the farm is surrounded by no less than 50), and ask me the same questions they’ve asked me in the past. I guess no one’s writing anything down, because every time I come in, it’s like we have to start from scratch.

After suiting up and going into battle with the veterinary industry for my dogs (Cutter–over and over they tried to kill him, Farley, Hannah (tried to kill her too),  and Wil (well, actually they did kill him, sniff), most especially; and all of them with the constant pushing of vaccines, heartworm “medication,” flea treatments, etc.), it’s time to do so for myself.  I’m keeping a diary of symptoms – my acute symptoms usually happen on the weekends (most often when I’m lying down – there’s something there…) though the recent days of mild, clear weather do seem to help. I’ve had the heating ducts cleaned to eliminate the crud blowing in the air in the house and now need to have someone come in and do the attic (vacuum out the old, gross blown-in insulation and all the rodent droppings it contains) and the crawlspace needs…something. The mold that’s integral to Farmer’s Lung disease is an exposure related issue, and I need to eliminate exposures, because “the stakes are high” is an understatement.

Gratuitous cuteness. After shearing I was wiped out so came inside and made some soup and toast. Daisy got to lick the can clean, and when we curled up on the sofa for a nap, she kept the can with her, like a drunk and his beer can. Heart her!