A beautiful blush-pink foxglove came up next to the deck this year.

We just observed Memorial Day here in the U.S., the day where we honor our deceased military. It’s a sad day, though most of us look at it, at least initially, as a day off work. It’s a much needed three day weekend for me, as I imagine it is for most of us doing the 9-5 thing, where we have an extra day to sleep in, relax, visit with friends and family, maybe a barbecue, and the start of summer and camping season. Only it’s not just that. The municipal decor (flags and bunting decorating our towns) and television programming reminds us why we have this day off. It makes me sad, as it does most, I guess. We are a warring nation, and have been in one conflict or another for nearly all of our 240 years. Some justified, maybe, but others not so much (including our latest, still going after 15 years – thanks W).

I came home from work one day to see this – a great blue heron perched on the tippy top of a snag by the dairy across the street.  He must have been hanging out with the eagles.

It’s been rainy for the past week or two, and the cool, misty cloudiness has been welcome. But on yesterday the sun was back and the day burst forth. My damp little hillside is slow to wake up, situated as we are, but there was no denying the return of the sunshine. Everything green is rejoicing in it, and the birds and the bees exuberant with it. I’ve been listening to the local Swainson’s thrush, only just returned this past month. There’s one who’s staked out the lower woods, down by the driveway (his song is the first thing I hear when I get home from work each evening and get out of the car to open the gate, and it’s magical), and another at the top of this same patch of woods.  Their song goes back and forth almost all day, a lovely challenge and warning to one another: “This is mine; you stay on yours.”  Why can’t humans do this instead of the awful way we challenge one another, with arms and physical violence? 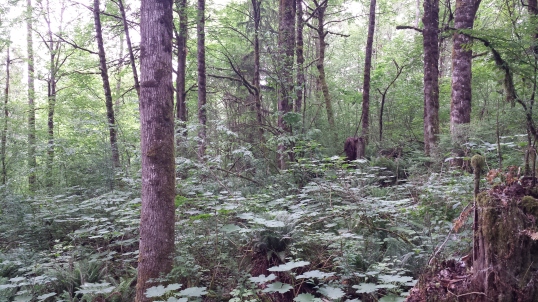 The woods behind the house, where the Swainson’s thrush sing.  And, the night before I took this photo, a chorus of coyotes as well.

Of course with the sunshine comes the humans, and the road activity increased markedly compared to the cloudy, wet Saturday and Sunday. During those rainy days I could hear the birdsong so much better, where on Sunday it was just snippets through the lulls in grinding engines and acceleration. If I could change one thing about this place, I think that road noise would be it…(location, location, location) or maybe I’d change the exposure to something more southeasterly – it’s a toss-up.  I took a walk in the woods on the other side of the fence, where the now-trickle of Rasmussen Creek flows. I actually saw a Swainson’s thrush – even when they come close, they’re masters of hiding behind a leaf or a branch – and I must have surprised him/her by being where I was.  S/he flew off to watch me from behind cover, disappearing again. I walked slowly, stopping frequently, and saw a song sparrow in a dapple of sunlight, fluffing and shaking off, grooming his feathers after a recent dip in the creek flow. I found a couple of discarded robin’s egg shells, the mother bird taking the impossibly blue casing (one wonders why the eggs are blue – wouldn’t a brown speckled version be better camouflaged against predators?) and discarding it safely far away from the nest after a successful hatching.

A weather phenomenon over my house in an otherwise cloudless sky.  This HUGE circle or ring is evidently called a solar halo (though it was not encircling the sun) and was so large I couldn’t get a photo of all of it.  It looked like it was encircling my property from above, and was very cool, but also a wee bit eerie.  (Under the Dome, anyone?)

Then it was back to the gate, to Daisy’s obvious relief (“There you are!”), where Farley had been barking at bicyclists all day (he catches glimpses of them through the brush between the fence and the road), and up the driveway.  The sheep were in the pasture, content to stay there grazing in the sunshine and chewing cud in the shade. I heard the song of the dark eyed junco, chickadee, and towhee, the chip of hummingbirds as they zipper past, and the other robin family visiting the red huckleberry, and the towhee and Swainson’s in the red elderberry that twines through it.  The rustling and thrashing in the salmonberry bushes shows me a Swainson’s or a robin picking the barely ripe berries, and I revel in their enjoyment.

Pal’s handiwork.  He’s the sweetest of my three dogs but he doesn’t mess around when it comes to varmints.  Evidently this one was delicious.

The cherry tree is moving towards ripening, though I have a gray squirrel who is decimating the unripe cherries. This frustrates both me and the dogs, though for different reasons. Pal actually managed to get two juvenile squirrels earlier this month – something I’ve not seen him do before, and I was at once squeamish and pleased. He was quite proud of himself (this is a dog who hunts all the time – mostly just stalking behavior – but has never played with toys of any kind, so when he prances up happily with a toy in his mouth it’s a bit of a shock), and I was ultimately glad to have them dispatched (Eastern gray squirrels are not native, crowd out our native Douglas squirrels, and eat songbird eggs and nestlings). I may try live-trapping the one who is prematurely raiding the cherry tree (which means my June visits of canopy birds I never get to see otherwise, drawn in by the cherry bounty, will be curtailed or eliminated altogether), but can’t figure out where I’d release him/her when I catch him. Having live-trapped/relocated in my previous home, I know how aggressive they are (kind of scary when in the cage), but I also saw a resurgence of Douglas squirrels at that property, with ongoing trapping and relocating.

Gordy’s fleece; some really nice wool here, but also some not so nice as well (mostly due to my late shearing this year).

I spent some time skirting the fleeces from shearing earlier this month and there are only a few more to go.  It’s deliciously relaxing, and I listen to podcasts from Woolful.com as I skirt and evaluate.  And also throw the ball for Farley.  Daisy snoozes nearby in a pit she’s dug for herself in the cool earth, her nose adorably brown from her digging and nosing things into that just right shape. Pal runs by once in a while, always checking something out. I’ve been keeping the cats inside until dark, as it’s prime nesting season now, so they snooze the day away in sunbeams on my bed. Life is good.