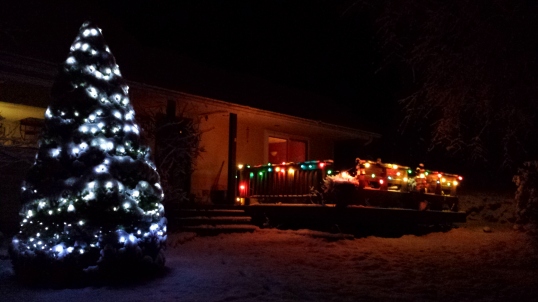 Here we are again, at the end of another trip around the sun, the holiday season winding up, the days growing longer (even if we can’t tell yet). The year ended with mixed reviews for me. Mostly it’s just another year, with highs and lows in equal measure (although I’m not keeping score there), but so much going on in my country politically is upsetting, with nearly every day bringing a new outrage from the nation’s capitol. It’s too much to take in some days, and my blog, as I’ve designed it (at least this one), isn’t a place for that discussion. I have faith our ship will right itself, but it’s going to require all hands on deck to do so. 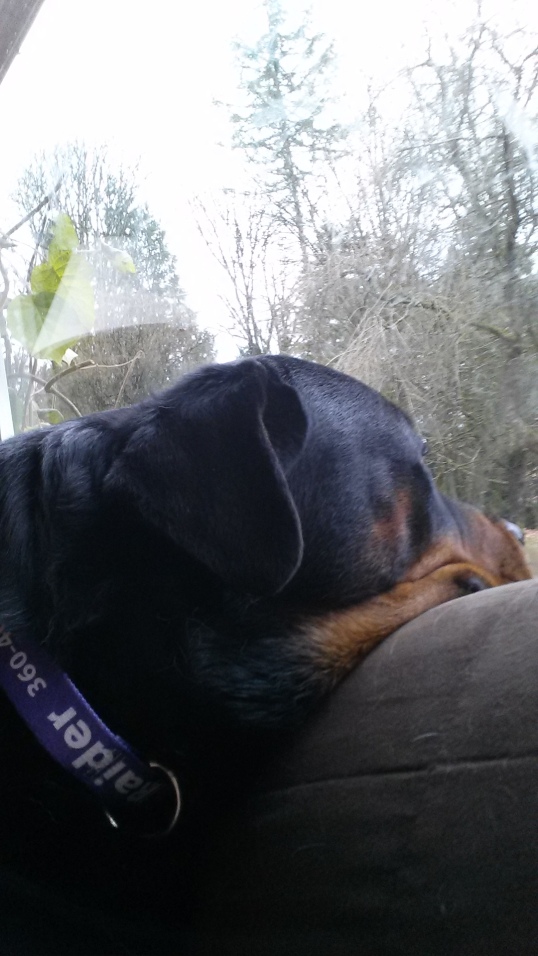 I cry nearly every time I think of him. He was truly exceptional. I am lucky to have had him even for just two months.

A personal loss hit me hard a couple weeks ago – I’m still too raw to write about it here, and may never, but a friend called it a tragedy, for that is what it felt like. Because I dislike (intensely) when people are cryptic about these things, for now I can only say, in a nutshell, that I lost my darling Braider—after only two months with me—to a sudden onset, acute autoimmune condition. More information, for now, is here. It has left me devastated, but I simply cannot end the year with this as the marker. So I am going to focus on some really good, even great things that happened in the past few months.

One thing, which maybe isn’t a big deal to others, but is kinda awesome for me, is I finally got my new kitchen faucet installed. New kitchen faucet, you say? Yes! For an embarrassingly long time (like, over a year) I’ve been dealing with a faucet that had almost no flow. Water trickled out in a leisurely way, with a gallon jug taking several minutes to fill. It was getting worse and worse. I checked the water hoses under the sink, but my water filter’s faucet had/has great pressure, and though tiny in comparison, filled at 4 times the rate of the main faucet. I looked at it from underneath, thinking I could take it apart and remove grit (the likely culprit) but when I looked, I could see there’d be no accessing anything there. So, I planned to replace it. I was looking forward to getting a single handle with a pull down sprayer. I shopped and shopped, but never pulled the trigger. Finally, last August, I settled on a design by Moen that also had good reviews. I bought it at the local box store so, if I had to, it would be easier it return. It sat in the box for weeks, then months. I was waiting until my water filter tanks needed replacing (a major operation and I figured it would be a good time to install the faucet).  In early November, at long last, the water filter needed replacing. I put it off, and put it off, intimidated by the faucet job. I watched YouTube videos on replacing kitchen faucets. I read the instruction manual. I procrastinated. I contemplated, a few dozen times, calling a plumber. Then, Thanksgiving week, while I had some extra days off, I did it. I pulled everything out from under the sink, got the water filter tanks moved out and grabbed a couple old rugs and some towels for support for my back. I got the wrenches and pliers and whatever else I could think of. Then, after almost chickening out, I started in. And three hours later (and only one run to the hardware store and one phone a friend (the two fellas I called weren’t around, so I had to soldier on without advice)), it was in! 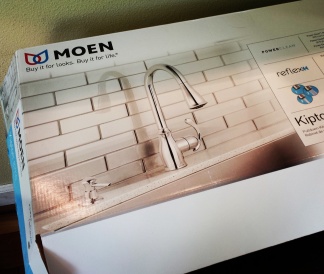 The box sat on a table in my living room for three full months.

Intalled and looking good. The sink looks puny in this photo – it’s not huge, but it’s a big sink.

And it looks FABULOUS, if I do say so myself. The water comes out at a normal flow, the pull down sprayer is awesome (I had eliminated the side sprayer that was here when I installed the water filter faucet back in 2011) and, who knew, the sink itself stays a million times cleaner than it did with the trickle faucet.  It’s nice to rinse a dishrag or kitchen sponge and have it really rinse clean, and the whole kitchen stays cleaner because of it.  I ROCK!

The window to the right of my desk (looking west).

The old Pontiac dealership was here.

The window behind my desk. It’s wonderful when the sun shines and I am bathed in warmth.

Looking out my window (southwest view)

Another great thing is my job got cooler. A couple months ago I wrote about my deep unhappiness with things in that department, mostly due to my own yearning for something more, but also because of some “challenging dynamics.” The dynamics have changed, although the work load is still crazy at times, and best of all, my location has changed. My company moved to a new office (only a couple blocks away from the old one) and the new workplace is wonderful. It’s in a brand new building, and the office interior design is open and clean and bright. No more rat maze of gray, six-foot high cubicle walls. My desk, while still essentially a cubicle, is open and airy and is a corner office. Seriously, it’s one of the nicest locations in the entire office, IMO, and I’m still pinching myself, wondering what I did to deserve it (well, other than hard work and dedication). I have a stand desk, too – a real one. My old one was one of those desktop lift jobs, clunky and heavy and hard to get just right. This one moves up and down at the touch of a button. I find I stand a lot more now because it’s so ergonomically comfortable. The view of little ol’ downtown Bellevue is wonderful, with a peek-a-boo view of Lake Washington and the I-90 floating bridge. In our first or second week here a pair of bald eagles were wheeling around over a nearby building. The evening lights are really pretty, and I just realized as I wrote this that I look down (over) at the location where I bought my first car, many, many years ago, before Bellevue had a single high-rise. The Pontiac dealer was on the corner of NE 8th and 108th, and my bus went by it every day on the way home from my first job. I used to stare at the shiny new cars as we waited at the stoplight, and locked in on one of the models on the lot, and bought my little Sunbird – a hatchback, so I had a car for my first dog, Mikey, to ride in. Times change; priorities, not so much. 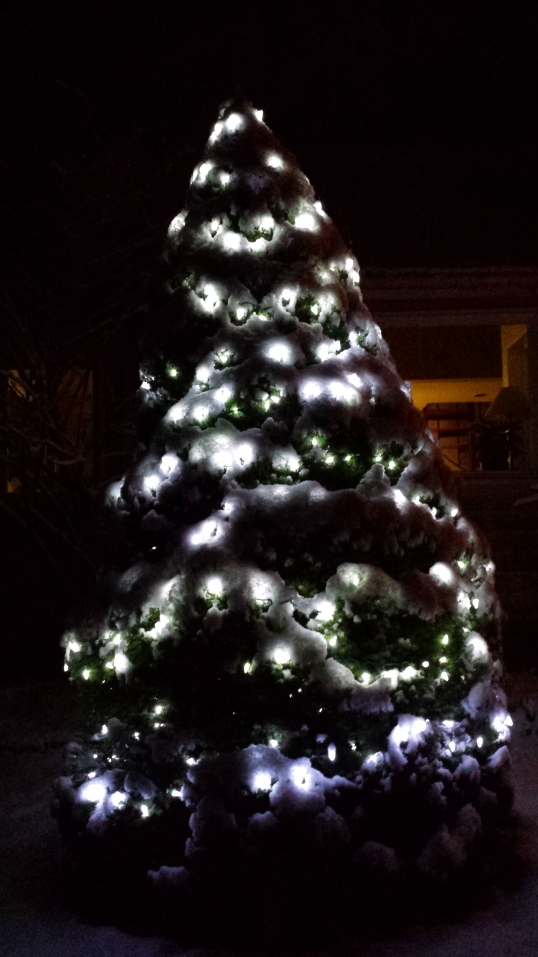 Last on the list here, we wound up the year with a fabulous white Christmas, the best one ever in all my years here (I’ve lived here most of my life, but spent some early years in New Jersey, where white Christmases were common). It snowed all Christmas Eve, and by the morning there were about 6 inches of white covering the world. It’s Puget Sound snow, so not light and fluffy, but we’d been cold and dry for the week prior to the snow (versus the typical rainy and wet), so it wasn’t the usual half-slush we get. I spent a quiet day at home with the dogs (recovering from a cold virus that was kicking my butt), alternately playing outside with them (Daisy LOVES the snow) and then coming inside to curl up with a hot mug of tea and watching Christmas movies while eating way too much Christmas chocolate. It was perfect.

Daisy, looking fine with her herd of wee Shetlands.