Archive for the tag “adoption”

Giving thanks to doG 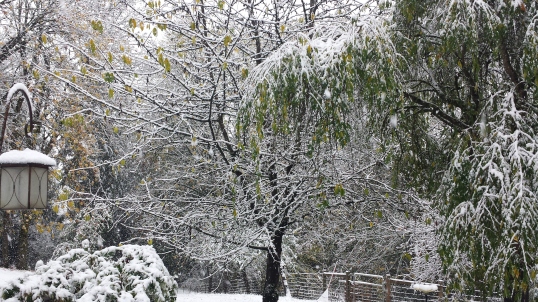 An early snow (really early!) on November 5 turned everything into a winter wonderland even before the leaves changed color.  I love snow!

We’re winding up the Thanksgiving weekend here in the U.S., and I’m not looking forward to going back to the real world of commuting and working tomorrow, but alas, a winning lottery ticket is not yet mine. I took the entire week off (so have been off work for 9 days now – heaven) and the dogs have loved it as much as I have, sleeping in with me on the couple of days I did that, and enjoying the days hanging out with me (even when we’re stuck inside because of the torrential downpours), instead of waiting all day long for me to come home from work. I am lucky to have them. And, as I mentioned in my last post, we are up one now, with my “Failed Foster” status. It’s been many years since I fostered a dog, and I didn’t intend that this one would fail, but this is a clear reason why the word “fail” should not be loaded with such negativity (failing at things is often a sign of progress, but I digress. 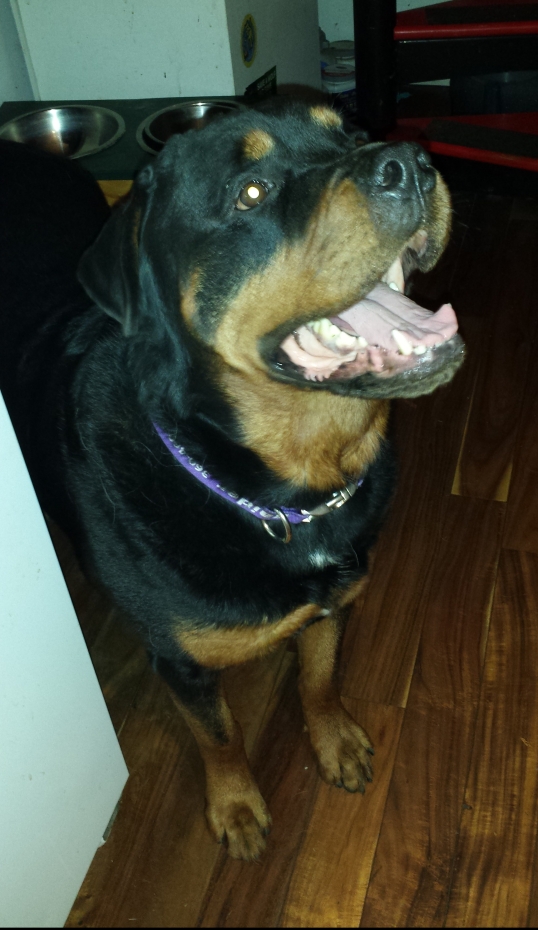 He is obsessed with shadows and reflections.

Formerly known as Raider, this dog is filling a hole I didn’t know existed. As I stood on the porch one rainy evening last week, toweling off FOUR dogs, and wiping 16 paws clean before we went in the house, I had such a deep feeling of…I’m not even sure what the word is…completion is the closest to it, but still not perfect. Somehow the circle is now closed.  As the four of them stood around me, waiting their turn, standing back or pushing at the closed door to get inside, the gap I didn’t know was there was filled, the puzzle piece found and placed in the vacant spot. It was a nearly audible click as I stood there, surrounded by 300 pounds of dogs, with these four hearts that surround mine and give meaning to my days. 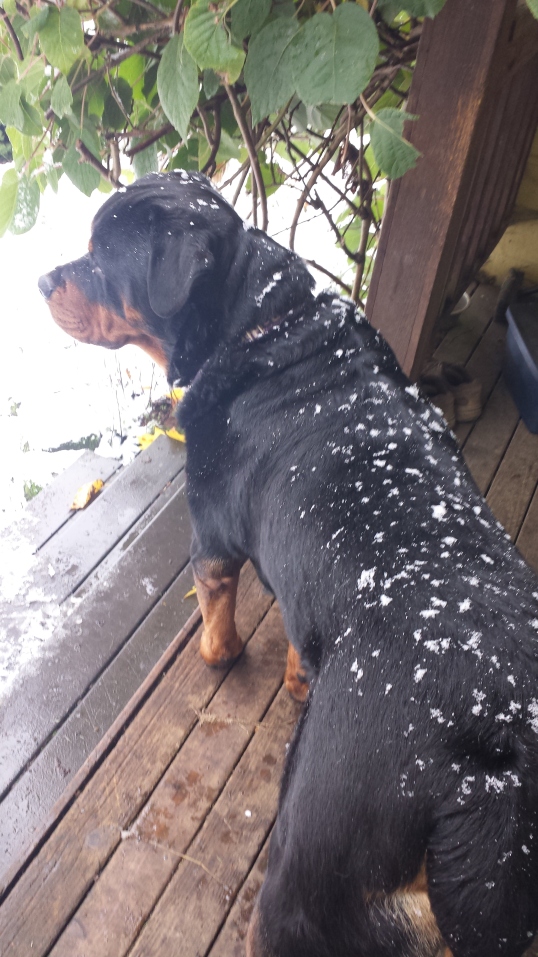 Raider came to me when I offered to foster him. My friend had placed him with “W” two years ago, from a rescue situation. Raider was shipped here from Chicago in 2015, having ended up homeless when his owner had passed away and the family didn’t want him. He was 4 years old when he came to the Northwest to live with W, a loving home with two adults and a companion dog who all adored him. Then W got sick.  W’s wife had had a bad fall and broken her leg badly, so was using a walker. When W got sick, then sicker, she knew that Raider had to be placed, as they were not able to continue caring for him. W did not want to consider the idea, and became very upset. My friend knew Raider would need a new home, but since the doctors said W “had a few more months,” we just waited. Unfortunately it was only a couple weeks when Mrs. W called. Sadly, W had passed away, and for the second time in his life, Raider was in need of a home due to a death in the family. 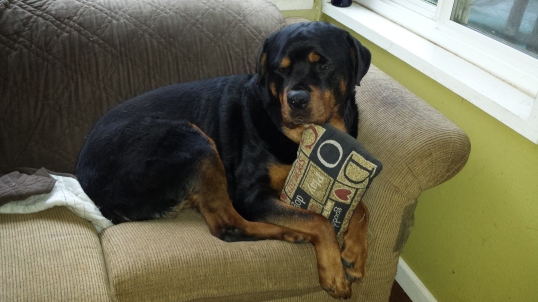 I took him in, wondering why I said I would do this (softie for Rottweilers, and wanted to help my friend out) and hoping against hope that it would work until we could find him a home. With my three dogs, three cats, and flock of sheep, there was a lot to integrate. My friend brought a giant crate for him (Impact brand – I am now coveting more of these crates, as this one is only a borrow), a giant orthopedic bed (which my other three dogs say is really nice) and a stand-up feeding station, plus Raider. It turns out I had little to worry about. 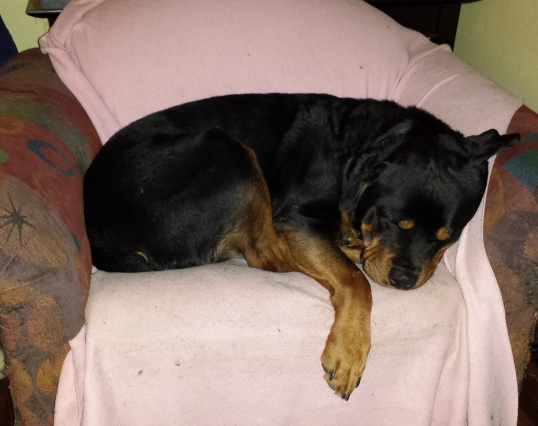 He’s not the cuddle bug that Daisy is (yet?), but who could resist this? 117 pounds of squishy-faced cuteness.

This dog…this dog is nearly perfect to me.  He reminds me of all that have gone before him (and oh, how I am mush for a boy Rottweiler – putty in their paws, really, but they never seem to take advantage of it to run the show, unlike a Rottweiler bitch, who will come in with her paws on her hips, virtual arms akimbo, and tell you how it’s going to be (in the nicest way possible, of course)). The boys just melt me. I tried to remain strong – the first week as my three adjusted, and then the second week, as Raider showed us more of himself. There were a few scuffles – once when I fed raw meaty bones on Raider’s second or third day here (facepalm to my own stupidity there!) and tensions were high, Farley took on Raider in the kitchen. WTF, Far – this dog is twice your size! Raider didn’t engage other than to protect himself, when he could easily have taken Farley down with one paw tied behind his back. Then another time Farley was playing with a stuffie – it took Far a week before he would finally offer me a toy (normally a multiple daily occurrence) with Raider here – and Raider thought “Weeee! I love stuffies too, let’s play tug!” Farley tore into him, and I had an instant dogfight at my feet. Again, Raider only protected himself, and the YIPE! I heard in the 5-second scuffle was from him.  As was the tuft of hair on the floor afterwards. He learned that Farley doesn’t play with other dogs, only me, and when he growls that goofy warble of a Setter growl (heart!), he isn’t kidding. Got it. But beyond Daisy pushing and pushing and pushing on Raider, always jealous of any attention I give him and always eager to show him who’s boss (when we ALL already know bitches get the job done), he integrated beyond my wildest expectations. 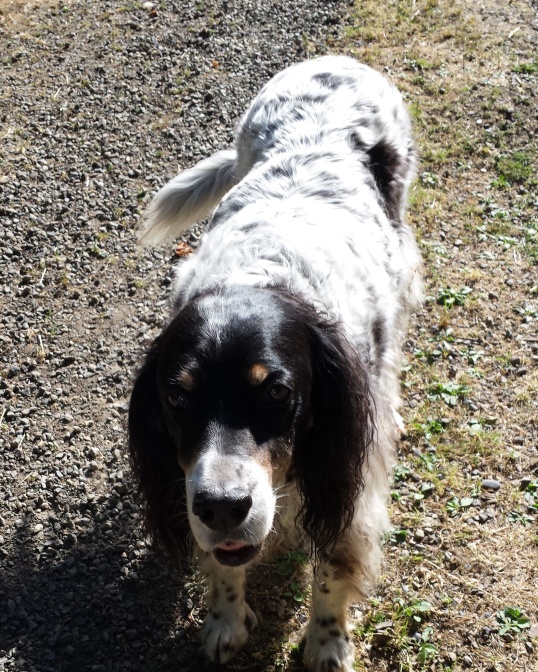 Don’t let this soft face and swishing tail, or the spots, fool you – this guy is a tiger (I often call him my tiger, and he’s taken it to heart).

So it was easy to write this bio to find him a home. The rescue person from Chicago, involved in his 2015 placement, said she had a good home there for him and we could just ship him back. I put my foot down at this. While I appreciated her help/offer, I was already fierce in my protectiveness. When the Perfect Home showed up a few days later, it was easy to sing his praises to them. But as I pulled away from our “get acquainted” meeting, I realized that even if they were a better home than I was (only one other dog, and two of them, so Raider would get more one-on-one attention than he gets from me), I didn’t know if I could give him up. I had tried so hard to keep logic and emotion separated, sure that the emotion I felt was just feeling sorry for his sad story of losing two homes due to his owners dying. “But,” said Emotion, “if he is so damn perfect why aren’t you keeping him? He’s squishy-faced-cute {swoon!} on top of it.” Then Logic replied, “Um, try the houseful of dogs you already have, Mo? Bandwidth? Cost? Room? Seriously? WTH?”  When the Perfect Home called me a couple of days later to reluctantly pass on him (timing/logistics), I realized I could pull the ad. I was walking two feet off the ground after I hung up the phone. He was placed. He is mine. 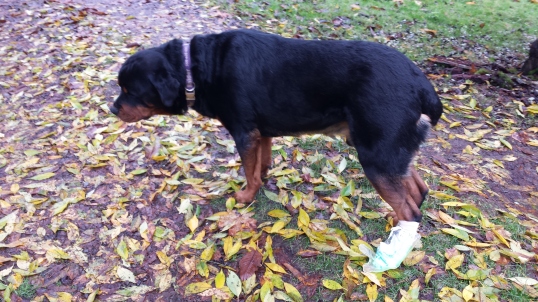 His first vet visit (for a broken toenail), about a month after I got him.  He’s woozy from sedation here, but the toe healed up beautifully.

I’ve rechristened him Braider, after going through a number of iterations rhyming with Raider. Normally I have no problem changing a rescue dog’s name–and even recommend it—but he responded so beautifully to it, and it was patently obvious he had been loved by both of his previous owners.  But I couldn’t live with such a “guy name” as Raider. As a writer, I know that words have power, and naming dogs these sorts of “aggressive” names doesn’t sit well with me. I tried Tater, Vader, Bader, Brader, and all sorts of variations before settling on Braider, which works for the meaning – he came in and braided us all together, bringing his gentleness and good manners and his beautiful Rottweiler heart.  I am his. 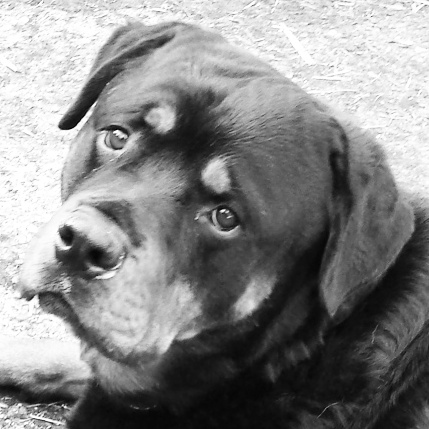