Archive for the tag “exercise”

I have no excuse, other than being my usual busy self. But I look at other farm bloggers – some of people I know, others I’ve gotten to know through their blogs – and wonder how they do it. My fellow shepherd friend, Donna, posts at least three times a week on farm and her other interests; Celi in the Midwest posts EVERY DAY, delightful daily updates on her farm (and of her travels, when she’s able to get away for vacations).  I am in awe of both of them, as I know how hard they work, and how many animals they tend.  But I’ve also noticed they manage to keep their posts a lot shorter than my novellas.  You’d think as an editor, I’d be able to edit my own stuff better.  I could, I suppose, if I posted more frequently like they do, instead of trying to play catch up each time I post.  But since posting this blog tonight took the better part of 90 minutes (not writing it, just trying to log in and get it posted), I remember the other reason this has defeated me before. WordPress doesn’t like Firefox, and it seemed none too happy with Google Chrome tonight either (nor my geriatric XP operating system).  My connection speed was glacial tonight, with every page taking several minutes to load…so who has time for this?  I guess I need to move to my laptop (Win 7) for posting from now on. 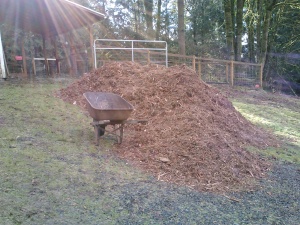 I can’t tell you how many blogs I write, though, that never make it beyond the grey matter.  I wax poetic as I’m doing whatever it is that keeps me from my blog, composing in my head as I, say, move 12 yards of hog fuel (shredded bark and wood used as mud management/footing in animal pens) delivered one recent Saturday into the sheep pen. It didn’t have to go far (so close, yet so far…), but it was uphill and it was a lot. I was doing the calculations and figured it took about six wheelbarrow loads to move each yard.  I moved over 50 wheelbarrow loads (at 6 cubic feet each) but there’s still some left in the pile (27 cubic feet in a cubic yard). So either they gave me some extra, or the fluffy aspect came into play (it was nice and dry and light, freshly dumped and no rain, so no settling. Or maybe I just have the wrong calculations. 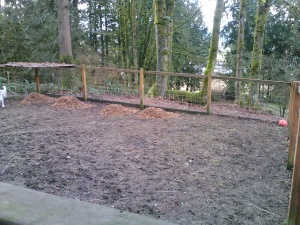 This is going to take a while.

At any rate, I was darn proud of myself and ended up surprisingly un-sore. I thought that I’d be sore on Sunday, after I’d filled and moved 20 loads on Saturday. But I got up that morning without any real soreness or stiffness. I moved another 33 loads on Sunday afternoon, running out of daylight and moving the last half dozen loads by garage and barn light. For sure I’d be sore on Monday.  But not really.  Tuesday then, in that way that exertion waits a day before the muscles really bind up. Tuesday came and went and nothing much. A little tightness in my calves, and my arms were a little sore, but considering how I felt on Sunday night as I moved the last load, and weakly raked it out (running out of steam), I felt great.

I felt much better, in fact, than normal activity (not much at this time of year). It won’t surprise anyone that I’m no gym rat, and my activity is usually centered around doing stuff around the property.  My day job is sitting all day in front of a computer, so by the end of a day (especially after the commute home) I’m actually much less limber than I was after moving all that hog fuel, without a few hours of daylight to putter around outside after work.  And the other thing, maybe the bigger thing (from a mental affects the physical standpoint) is the sense of accomplishment I felt, that I rarely/never feel at work, pushing papers (usually virtually) all day long.  This was physical and totally visual – starting with a pile taller than me, and wider/longer than my car, and getting it all moved into the pen over the course of two days.  And 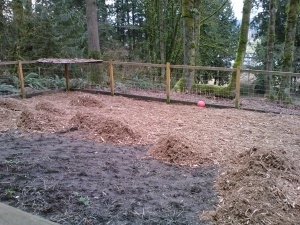 the best part is seeing how the sheep appreciate it. The hog fuel helps with drainage and once it was in the sheep were using the entire pen in a way they hadn’t been, and sleeping in little beds they scuffed up in the footing, and not having to squish through mud to get to their feeder.  There is the little problem of the stuff becoming wound up in their wool, but considering how the hay has already thrashed their fleeces, I’m not too worried about a little wood chip or three. 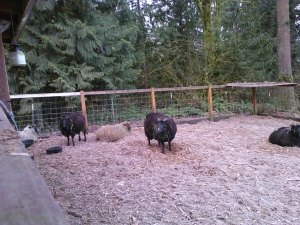 So after that we had a week of frozen weather – I loved it!  No mud is always the best.  At the end of the week, though, the pipes froze – at the well or at the tank – and the pins and needles all week, hoping it wouldn’t, then when it did, takes some of the enjoyment out of the weather.  It was only out about 48 hours, so in addition to thawing water buckets for the sheep and chicken waterers, I was buying jugs of water to keep us all hydrated.  I find I really miss being able to wash my hands properly.  That and it’s awfully cold outside when you have to drop trou to answer the call of nature in subfreezing weather.