Archive for the tag “numerology”

Always late but worth the wait?

The evenings stretch on for hours and it is glorious.

The days seem to fly by. Despite the fact that they’re 16 hours long right now (speaking of DAYlight hours, of course). I have been busy with life, trying to keep up with Jungle Season growth (not succeeding), shearing (also not succeeding – I passed the halfway mark, but still have 7 sheep to shear – all the wild ones are left), and regular chores. One thing I AM making progress on, however, is my Plan for the next chapter of work life. I have been reading and learning as much as I can, beginning the transition work. I updated my website again. I like it a ton better now (compared to them major overhaul/ update I did in…was it March?), but I still consider it a work in progress. I have been learning a lot about virtual assistance work and am doing worksheets and exercises to refine my specialty/s. I haven’t actively sought out clients on this yet, but that will be the next step. I am also taking a fabulous class for launching my writing a bigger way. It’s called “Pitch Like A Honey Badger” and is fabulous, and really forcing me out of my comfort zone. I have a long way to go yet (although the class is over in 2 or 3 more weeks), but have learned a ton already. I got behind on the lessons (this is an online class, BTW – something where I usually have a hard time with follow through) because I was busy working for a client. I was contracted to create their newsletter and because it was behind (before it came to me), there was a hustle to get it all done. I literally started receiving the info the first week in June and had it done in less than 3 weeks. It felt good, but between becoming familiar with the content and layout, making sure I had all the pieces, and placing them in the right order, all while working the day job, going to a sheep workshop, taking care of the critters and farm, well, it’s no wonder I’m a wee bit behind. It’s all good, and all of it feels really good, and I am excited (even in my moments of “I don’t know if I can do this and make enough to live on” panic) for the future. My hope is to launch my business/go solo by the end of September or October. Terrifying and exhilarating at the same time. That’s only 3 or 4 months away and I have a LOT to do in the meantime. It would be nice to have a nice fat cushion of a bank account to sit on while I ramped up, and really have time to focus on it, but doing the side hustle thing for a few more months will have to work. I can do this! 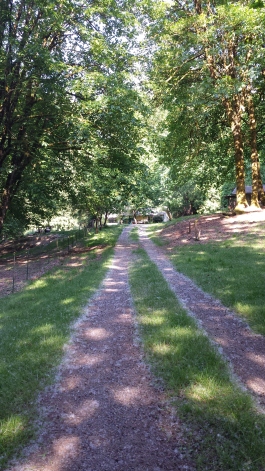 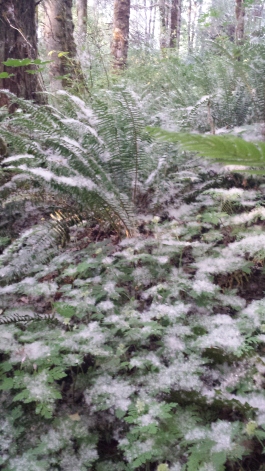 I have never seen this much cottonwood fluff accumulate. 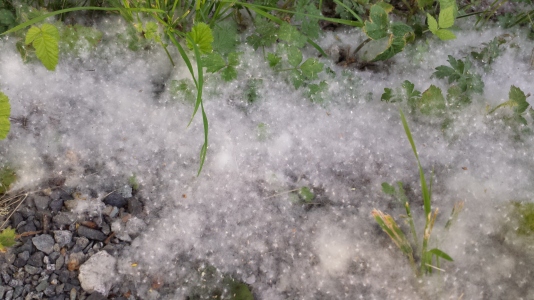 There were drifts of it; enough for several square miles of cottonwood forest in those seeds.

I have also been reading some astrology and numerology reports (oh yeah, I go there – I’ve been woowoo for years) that have reinforced to me that the time is now. My numerology report had the hairs on the back of my neck standing up (I’m a 22/4, having an 8 year), and the weekly astrology update I get (NorthPoint Journal) has been hitting it out of the park with regard to resonance for the past couple of months. Lots of Aha moments resounding and it’s helpful to know I’m on the right path. In fact, with Mars going retrograde until the end of August, I’m glad for the extra time to get my ducks in a row before I launch. 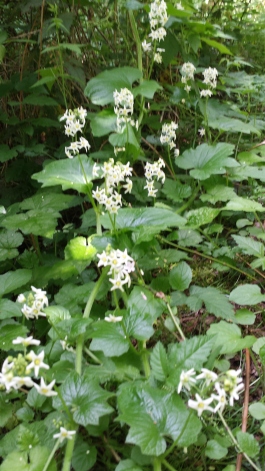 The manroot vines lining the driveway. 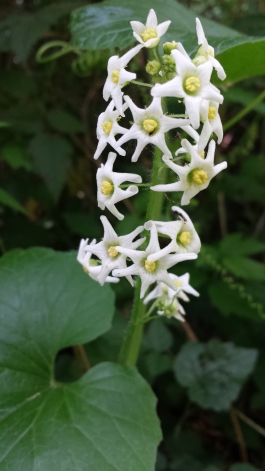 In other news, the critters are all well. No lambs this  year, so it’s been a lot more relaxed with the sheep. I need to reduce the flock by at least five, but beyond two that I know I want to get rid of, I’m having a hard time with deciding who should go or stay. I really like all of them, and the friendly ones are endearing as heck.  If I could find a home where I knew they’d be fiber pets, I could maaaaybe let the 3 boys go – Rudy, TJ and Shadow. I would like to breed again this fall, for 2019 lambs, but can’t really consider it until I reduce the head count a bit. The property ran out of fodder about 10 sheep ago (the flock numbers 17 right now) and I am resigned to feeding hay  year round instead of just 10 months a year. Ah well. It would be nice to have another pasture to rotate them to, but then I’d probably just have more of them. And on top of it, I have a garage full of fleeces I need to sell, with this year’s still needing to be skirted. Part of the reason behind my wish to work for myself is the time I hope to free up (1 ½ to 2 hours per day of commute time alone – almost 10 hours a week!) and not feel so overwhelmed after a long day of work and commute. There’s a mild depression going on too, with the day job just feeling…done. Despite my post in December citing the new offices and job “funk” easing up, some recent changes have me again very unhappy and feeling both undervalued and disregarded. But ultimately, it’s just the final cuff to the head from the Universe, trying to get my attention, and I’m heeding it now. Finally. 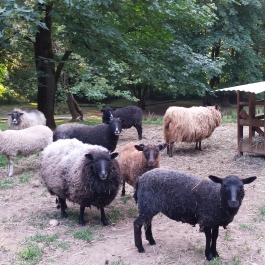 Kerry looking fluffy while her daughter Eldora (Dora) is sheared. 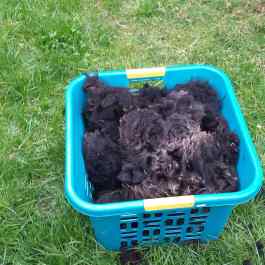 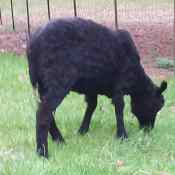 Eldora is now just Dora, with her gilded fleece sheared off. 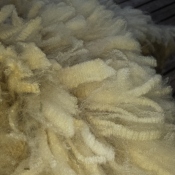 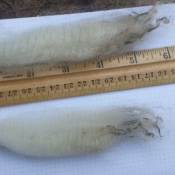 The dogs are well. Just celebrated my year 7 anniversary with Daisy, and Pal’s year 8 is coming up in about 6 weeks. Time really does fly. After Braider’s rescue last fall (even though I was a foster failure) I finally took the plunge on something I’ve been contemplating for close to 2 years now, and applied to once again become the Rottweiler breed rep for Seattle Purebred Dog Rescue. I know it seems crazy, with everything else going on, but it also seems so right. I was involved with SPDR at the very beginning – I went to their very first organizational meeting in 1987, and was their first newsletter editor, back in the days of paste-up (I named the newsletter “SPDR Speaks” – and I’m still proud of that one), and became their Rottweiler breed rep from about 1988 through 1995. It was hellish, because the breed’s popularity was exploding then and, coupled with some horrid, high-profile attacks with human deaths, no one wanted to adopt them. I think the last year I was rep I had 500 incoming dogs and nowhere to place them. It took two decades to recover from that – ha! (Not really kidding, though – the burnout was bad.) But I’m hopeful that we won’t have the same kind of numbers plus, the biggie, is now we have the internet and especially social media, which wasn’t even a dream back then. Email sure (although not everyone was connected back then), but it was a lonely, hard job to do. Fingers crossed it goes smoothly and I can make a difference. I helped to place an English Setter recently, and that felt really good (social media rocks it here), so I’m hoping I can be just as helpful with Rottweilers. Let me know if you want to be a foster home for a Rottweiler! 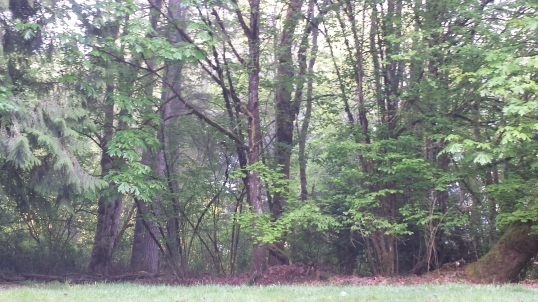