Archive for the tag “Setter”

I was out driving this past Sunday, doing some drive-bys on homes listed I thought I might be interested in.  As part of the process I’ve learned that you can pull up the pictures – hopefully there’s  a nice balance of indoor and outdoor shots – and check out the aerial view (look for power transmission lines adjacent or on the property, other property features (wet? flood plain? flat? steep hillside?), and neighborhood features–what’s that down the street?  A junkyard?), and map it, and if all systems look good, it’s time for a drive.  I put the bird dog in the car and took off, feeling glum about my “maybe” house (short sale that’s been vacant…and unheated during our recent week long artic freeze; I was worried about the frozen pipes bursting and causing damage to the home), and thinking I needed to step things up.

We drove to the first property, the one I was most hopeful about, and found that although the land was quite nice (six acres), the home was much too close to the rather busy road, and worse, the neighbors home was on the property line as stone’s throw from the front door.  Six acres and no privacy?  No thanks.  Next!

We drove by three more I had targeted – a couple of maybes, but nothing that blew my hair back.  Farley was climbing back and forth from the front seat to the back and starting to irritate me.  He was excited, with no outlet

(I’d promised a hike, but the drive-bys were first) and I scolded him to either stay in the front seat or get in the back.   Finally he laid down in the back, evidently giving up on any release.  (“Hike, my tail feathers.”)  Few dogs can do pathetic better than a Setter.  So now we were both glum.

I was feeling discouraged and wondering if I should put moving out of the area completely back on the front burner.  Oregon’s pinot noir wine country, or Bellingham by Mt. Baker (where there was what may have been a grizzly bear sighted in recent years – a huge plus for me), or to my beloved Okanogan Highlands.  As I drove through the Sunday snowflakes (it looked like dandruff, though was accumulating in some areas) and mulled these ideas, I saw them.  Trumpeters, a formation of six or…seven, flying low overhead.  I looked over and could see dozens more in a fallow corn field back from the busy road.  There were plenty of adults and youngsters mixed, the immature swans a sooty brown color in comparison to the adults’ pure white plumage.

I’ve been looking for them for a few weeks, ever since I saw about ten  flying low over the river by home when I was out with Farley over Thanksgiving weekend.  I’d heard them first, their trumpet-like call causing me to crane my neck looking for them.  They’re back!

Sunday’s group was a little farther from our usual haunts, and  I pulled off on the first side road I could find.  These farm roads are a series of els, and I zigzagged along, hoping I could find some swans to view a little closer.  I pulled down one road with an old dairy barn (no cows seen), and watched an 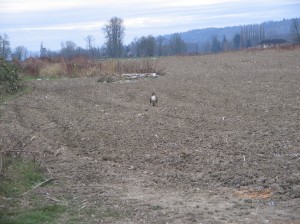 immature Red tail hawk swoop on something in a plowed field.  It didn’t look like a killing dive, but he stood on the ground next to something.  I stopped the car across the road and watched him.  And he watched me.  Finally I pulled the car away a little.  That’s when he grabbed the meal; it looked like a mole, perhaps turned up by the plowing, and flew off to a nearby tree with it.

I rounded another sharp turn and saw them then.  Dozens of swans a few

dozen yards from the road in a cut corn field.  By now Farley was practically singing, whining with excitement at all the birds.  I rolled down my window and snapped a few photos, careful to keep him from leaping out the window or making enough noise to scare them.  After we’d been watching them for a few minutes they visibly relaxed, the sentry swan even foraging for leftover corn.  As we sat there – no more than five minutes total – dozens more flew in, mostly in small groups of four or five, or sometimes just one or two.  The noise was as thrilling as the sight; they called to one another constantly, sounding like an orchestra of trumpets tuning up before the concert.

Seeing them brightened my whole day, and my worries and woes disappeared.  And of course it  reinforced my emotional bond to this area, and my desire to find my peaceful little farm somewhere close.  Maybe all is not lost.  The promised hike with Farley was a treat for both of us.

Waking up with flying squirrels

I make no secret that I sleep with dogs.  My running joke–though no one seems to enjoy it as much as I–is that every night is a three dog night.  Often the three cats will join us, for a snug six-pack of furry warmth next to me, on top of me, pushing me out.  I’ve awoken in all sorts of horizontal “Twister”-style contortions, with all of them surrounding me in a jigsaw puzzle of beating hearts.

Bedtop real estate is rarely contested, though there are grumbles and discussions, usually between Farley and Cutter.  While Farley always concedes, moving away in a scuttling rush, he does so with his warbling complaining growl (he wouldn’t dare growl for real) that elicits a talking response from Cutter.  Once The Monster (Cutter) is settled, always perpendicular to me, his head on my hip or leg, Farley leaps up to curl up next to /on my shoulder.

Farley is the baby of the family.  Somewhere around 3 1/2 or 4 years old, he joined the pack three years ago.  The Rottweilers accepted him and his always wagging tail, and his insane energy and drives.  And I learned about the vast differences between a working breed and a sporting breed.  Far is all 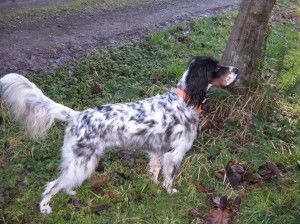 bird dog, all the time.  During the long winter months, when the weather is lousy and the back yard is a soupy mire of mud, Farley finds ways to entertain himself, and in the process, me.

My bird dog is all about his toys, and his delight with each one is such that I can’t help buying him new ones frequently.  He has a toy box that’s brimmng with stuffed squeakys and chew ropes, bones and balls.  Not to mention the sea turtles that are living under the bed, the pheasants lying around the house, the dimply honky ball (now in the wash), soft squeaky balls in every corner, a honking duck, a honking heart-shape (the honking sound is a siren song to Farley, so many of his toys have this) and the latest, a flying squirrel.  The toys are ever present, being tossed seductively to entice me to play.  As soon as I look at the item dropped by my feet he goes into a classic Setter crouch, poised for the feeble indoor throw, then the mad scramble for it as if there were even a remote chance of any competition for its retrieval.  He flips and tosses with delight (more than one toy has ended up in a pot of soup or sauce on the stove) and honks or squeaks incessantly.  And at the end of the night, one or more toys will have made it into the bed with us.  Thus, waking up bleary eyed and rolling over, I encounter this in the morning:

Yes, this flying squirrel is cousin to Rocky, of Rocky and Bullwinkle fame.  The chinstrap of his starred “helmet” turns into a slingshot, so one can launch him by pulling back on the tail and letting go.  The thing makes (er, made) a squirrelly chattering noise as it flies through the air, little red cape fluttering, eyes goggling out of its felt goggles.  The flying squirrel was pretty much an

I know it will only be a matter of time before another toy comes home with me to join the squadron.  And really, with a face like this, who could resist?

Posted in Dogs and other critters and tagged bird dog, dogs, Rottweilers, Setter | Leave a comment